Bankruptcy In Vedic Astrology-Combinations In Horoscope With Remedy – Kundli/ Birth Chart: Bankruptcy is a very common phenomenon that occurs in every 3rd or 4th person’s life in this world.  Bankruptcy can be defined in two parts. The first type of bankruptcy is when you lose a great chunk of money within a few days or a few hours. This type of bankruptcy happens to only rich people who have accumulated tons of money over several years. You lose it all through some sudden events or you can say through the downfall of their fortune or luck.

The second type of bankruptcy is when you’re continuously trying to earn money by working hard but unable to save or accumulate a significant amount. This dried-up bank balance happens because of hard luck or low income even after putting in effort. Bankruptcy is a common threat that traumatizes rich and middle-class people. Bankruptcy can make you penniless in life.

Bankruptcy In Vedic Astrology-Combinations In Horoscope With Remedy

Now, through the lenses of Astrology, I will try to predict the causes and timing of bankruptcy.

Example: Anil Ambani:- Anil Ambani became bankrupt when the main period of Saturn in 2014 started in his life and his 12th lord Jupiter is placed in 11th house. 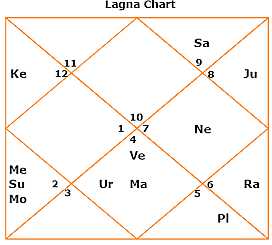 Dasa Factor in Bankruptcy In Astrology:-  Dasa of Mercury, Saturn, Rahu, and Ketu if ill-placed in horoscope then it always causes humiliation and bankruptcy in life. The main or sub-period of Saturn, Rahu, Ketu, or Mercury always causes bankruptcy. Dasa of 8th lord or 12th lord plays a major role in bankruptcy. Although, sometimes Dasa of Lagna lord(1st lord) or 7th lord can also cause poverty and loss of money if placed in 8th house or 12th house.

General planetary combination for bankruptcy or loss of wealth:-  Moon or Sun with Ketu. Mercury and Saturn are together in 8th or 12th house. Rahu is in 2nd house or 8th house in some charts. Sun or Moon with Rahu gives temporal loss and temporal gains as well. Jupiter in 8th house or 12th house alone can also give loss of wealth and status.

Planetary Combination which can cause Bankruptcy as per Ascendant

Remedies to get rid of financial problems even Bankruptcy In Astrology